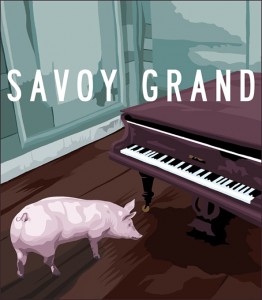 Savoy Grand is / are a band.    We operate out of Nottingham, UK.   We were formed in the dying years of the 20th century, and have been struggling to come to terms with the 21st ever since.

The band is formed around singer/songwriter Graham Langley (me, the writer).  We play what has been laughingly described as sad(and/or slow)core.  When the laughter subsides though, I am still left struggling how to describe our music.   Our songs are an honest attempt at self- expression, and chiefly designed to appeal to us, the musicians.   Luckily, other people like our songs enough to keep us striving to make them.   Take a listen, and then describe them to yourself.

We have been compared to Talk Talk, Low,  Blue Nile, stuff like that.  This is because our music can be slow and serious, and we use silence as part of our sound (I am interested in anticipation, psychologists take note…).   And because I sing quite high, like a woman.

In late 2009 we released our fourth album “Accident Book”.

The band has been through many line-up changes over the years, not surprisingly I suppose, as it’s over 10 years since it began.   People change, move on, get frustrated, that’s life.

Currently (November 2010) we can be described as:

Around People and What They Want, we had Neil Wells on bass, and Mark Simms playing Drums.

Lost Horizon was just Me and Kieran.

Burn The Furniture, and prior to that, was myself, Kieran, Oli Mayne, and Ian Sutton.

That should be enough information to be getting on with.